As part of the blog tour for Kings & Queens by Courtney Vail hosted by SupaGurl tours, I'm reviewing the awesome book!! You can find the tour schedule HERE. 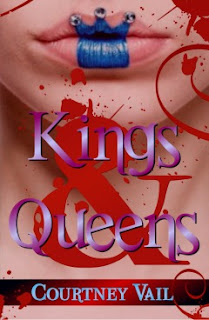 
Seventeen-year-old Majesty Alistair wants police to look further into her father’s fatal car wreck, hopes the baseball team she manages can reclaim the state crown, aches for Derek…or, no…maybe Alec…maybe. And she mostly wishes to retract the hateful words she said to her dad right before slamming the door in his face, only to never see him again.

All her desires get sidelined, though, when she overhears two fellow students planning a church massacre. She doubts cops will follow up on her tip since they’re sick of her coming around with notions of possible crimes-in-the-works. And it’s not like she cries wolf. Not really. They’d be freaked too, but they’re not the ones suffering from bloody dreams that hint at disaster like some crazy, street guy forecasting the Apocalypse.

So, she does what any habitual winner with zero cred would do…try to I.D. the nutjobs before they act. But, when their agenda turns out to be far bigger than she ever assumed, and even friends start looking suspect, the truth and her actions threaten to haunt her forever, especially since she’s left with blood on her hands, the blood of someone she loves.


Racquel's thoughts:
Kings & Queens in 8 letters ----> mind fuck. But... not really. Going into Kings & Queens I was like WHOOOAAAAA, because the writing is different. Not bad different but just different. Like Adam Levine's voice, you hear it and you immediately know this is Maroon 5, that's how Courtney Vail's writing is, if I came across a passage or something else she wrote I'll immediately know it's her because it's really unique and while I was really confused at the beginning of the book and I had to read some things twice, I eventually got the hang of things and everything just became normal to me because I got used to the writing. So if your like me, just stick out and it will pay off, because it's definitely worth it!!

Kings & Queens was definitely a more than meets the eye book. Even though I knew it's a mystery it still surprised me how serious the plot got; deaths, guns, kidnappings and such. There are also A LOT of layers behind all the characters and the plot, and I do mean a lot. Every time something new was revealed or something happened, it never failed to totally surprise me which is great. What's a point of a mystery if it's not really a mystery? and thank god that's not the case with Kings & Queens because it really kept me on my toes!


Of course I loved all the characters, even the bad guys because they are so well done. Derek is my favorite, he's so interesting and he's voice is so well beyond done! I also really enjoyed how mature the book is and Vail hit the nail with portraying the teen world. This makes me want to sing YAAAAY YAAAY.

The only thing that didn't sit well with me is *SPOILER!!!!!!!!!* Warren's & Jase's death. I was really sad when I found out they died but it wasn't that which disappointed me, it was how easily they were brushed aside. I think there could have been more emotions behind their deatsh at least from Majesty and because I felt there weren't any really sincere emotions, I kind of think that they were just killed off to shorten the list of suspects. *END OF SPOILER* 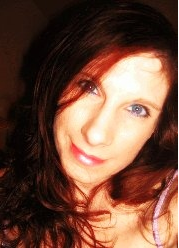 COURTNEY VAIL writes totally twisted YA and adult suspense. She enjoys braiding mystery, suspense & romance with some kind of weirdness. Her addictions to crazy coffee concoctions, Funny Bones, Ben & Jerry's, and bacon keep her running and writing. She currently lives in New England with a comedian stud and a wild gang of kidlets.

Have you read Kings & Queens? if so, you HAVE to tell me what you thought of it!