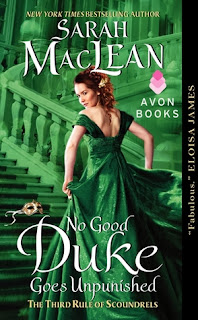 
Summary: He is the Killer Duke, accused of murdering Mara Lowe on the eve of her wedding. With no memory of that fateful night, Temple has reigned over the darkest of London’s corners for twelve years, wealthy and powerful, but beyond redemption. Until one night, Mara resurfaces, offering the one thing he’s dreamed of: absolution.

Mara planned never to return to the world from which she’d run, but when her brother falls deep into debt at Temple’s exclusive casino, she has no choice but to offer Temple a trade that ends in her returning to society and proving to the world what only she knows: that he is no killer. It’s a fine trade, until Temple realizes that the lady—and her past—are more than they seem. It will take every bit of his strength to resist the pull of this mysterious, maddening woman who seems willing to risk everything...and to keep from putting himself on the line for love.

This book basically blew my mind. How many times do you read a book where the hero and heroine fall in love despite the fact that years before, she had drugged him and he had supposedly murdered her?

(No, seriously. If you have any recommendations for books like this, please please let me know in the comments! I want to read more.)

My relationship with Sarah MacLean's books is a little back-and-forth, but she impressed me more than ever with No Good Duke Goes Unpunished. I was excited for Temple's book, because I was so intrigued by him when I read One Good Earl Deserves a Lover a few months ago. And this book did not disappoint! In fact, it was better than I anticipated.

For one, I had not read the blurb for this book. I knew it was Temple's story, and I wanted to read it based on that alone. So I had NO IDEA Mara was the heroine. I started the book at the gym and was just reading along when bam, she revealed her identity. I gasped and ceased all movement immediately. Thankfully, this happened when I was on the stationary bike rather than the treadmill, or that would have been a terrible (though, let's face it, probably amusing) site to behold. I was completely shocked. And perhaps I should not have been, but while I figured Mara would show up later, I did not dream they would fall in love.

But they did. And it was amusing, frustrating, swoon-inducing, breath-taking, heart-breaking and altogether addicting watching them do so.

Both of the main characters were so original and so intriguing! Temple was a duke-turned-fighter who ran a gaming hell with a few other partners. He was termed the Killer Duke, believed to have killed Mara on the eve of her wedding (to Temple's father!), though there was no conclusive proof. And the worst part was that he did not know if they were wrong. Mara had drugged him before disappearing, and Temple had gone on for years, fighting to regain his memories of that night but never succeeding. And then Mara showed up. Mara, who had been running an orphanage for the illegitimate sons of noblemen in the years since her disappearance. Mara, who held the key to Temple's reinstatement to his rightful place as duke, who, more importantly, held the key to what had happened that night years before. Their relationship was complicated, to say the least.

There were so many things to love about Temple and Mara. They had an angst (for good reason), explosive chemistry, a slow burn that wouldn't quit, and brilliant exchanges of dialogue.


“I shall take that as a compliment.”
“It was not meant as one. I was merely pointing out your libidinous ways.”
“Libidinous.”
“Roguish. Rakish. Scallawaginous. Scoundrelly.”
“I’m certain that some of those words are not words.”
“Now you’re angling for a position as governess?”
“If the boys are learning words like scallawaginous, it might not be the worst idea.”
*Quote taken from an advance review copy and may appear different in finished book.

Really, the only negative thing I have to say about this book is that toward the end of the story, Mara's self-sacrificing for Temple went a little too far. She just wouldn't. freaking. stop. I get that she felt guilty and had reasons for her behavior, especially at first. In fact, I admired it at first! Love wasn't presented as this all-consuming selfish thing. But the woman wouldn't let it go. She was attempting to convince herself that Temple was better off without her despite a thousand proofs otherwise. It got old fast and continued way too long. Other than that, though, I cannot think of a thing I disliked about this book.

This story was compelling, enjoyable, and ultimately satisfying. Though she came close with One Good Earl Deserves a Lover, Sarah MacLean officially won me over with No Good Duke Goes Unpunished.

First:
He woke with a splitting head and a hard cock.
Favorite:
What did one say to the man falsely accused of one’s murder?
Teaser:
It was one thing to drug a man once...but twice did seem overmuch.

*Quotes taken from an advance review copy and may appear different in finished book.