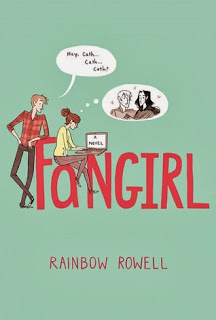 But for Cath, being a fan is her life — and she’s really good at it. She and her twin sister, Wren, ensconced themselves in the Simon Snow series when they were just kids; it’s what got them through their mother leaving. Now Cath’s sister has mostly grown away from fandom, but Cath can’t let go. She doesn’t want to.

Now that they’re going to college, Wren has told Cath she doesn’t want to be roommates. Cath is on her own, completely outside of her comfort zone. She’s got a surly roommate with a charming, always-around boyfriend, a fiction-writing professor who thinks fan fiction is the end of the civilized world, a handsome classmate who only wants to talk about words . . . And she can’t stop worrying about her dad, who’s loving and fragile and has never really been alone.

For Cath, the question is: Can she do this? Can she make it without Wren holding her hand? Is she ready to start living her own life? Writing her own stories? And does she even want to move on if it means leaving Simon Snow behind?

I've taken quite a while to formulate my thoughts about Fangirl. I read Eleanor & Park earlier this year, and while I did enjoy it, I did not fall head over heels for it like 98% of the blogging community.

Fangirl, on the other hand?

This book could have been written for me, y'all. I waited a long time to write this review, because I thought I might be able to be more coherent, more logical, spelling out points A, B, and C as to why this book is awesome.

I gave up. Sort of. I decided to do the logical thing and make a list! But fair warning: it probably won't be coherent, because my love for this book refuses to be contained.

I know this book isn't going to be everyone's cup of tea. But it was exactly, exactly what I have been wanting from the New Adult genre. I don't want another story about the good girl and the brooding, tattooed boy. Appealing, yes, but that's not what I wanted when I complained for years and years that there were never any books set in college. This was. It was fun, challenging, and unique. I could go on, but I'm going to stop now and let the list do the talking. So, without further ado...


The ABCs of Why Fangirl Rocks, Why I Loved It, and Why You Might Want To Read It
A: Addicting. I couldn't put this book down! I read it in one sitting, and it's not a small book.
B: Baz. Baz was basically the Draco Malfoy of the Simon Snow world. He was the arch enemy of Simon Snow, but you knew there was something going on beneath the surface, too. Cath loved to write him, and I loved to read him.
C: College. For years, I've been longing to read books set in college, and this one nailed it! I especially love that Cath's college had a huge agricultural program that differentiated it from your typical universities. As I attended a school where most people (including my roommate) came for the equestrian programs, I appreciated this.
D: Dad. I really loved reading about Cath's relationship with her dad, even though it was hard at times.
E: Eeeee! This book will make you squeal and basically turn into a giant spaz. Or, at least, that's what it did to me.
F: Fangirliness. If there's one thing I can relate to, it's being a fangirl. I have been deeply involved in various fandoms over the last 10 or so years of my life, and I love it. I really do. It was fun to see this being played out in a book.
G: Growing up. Cath had to learn to grow up in a lot of ways over the course of the book, even though it wasn't easy.
H: "Happily ever after, or even just together ever after, is not cheesy. It’s the noblest, like, the most courageous, thing two people can shoot for."
I: Issues. Cath had issues. Her dad had some sort of manic disorder. Her mom had left (sort of) on September 11 (yes, that one). Cath herself had social anxiety she had to conquer to be successful in her new life at college. These were not small things, and Cath had to figure out a way to work through them.
J: Just Because. You should read it! Because I said so, that's why. (Hey, it works for my mom...)
K: Kissing. There is KISSING in this book. Good kissing.
L: Levi. GAH. I could write paragraphs on Levi. He was so far from your typical gorgeous hero, for so many different reasons. He was a farm boy. He was so happy, always finding something bright to focus on, and Cath had an obsession with his ten thousand smiles. I could go on, but I will stop here. I still have half the alphabet to go!
M: “Months are different in college,” Levi said, “especially freshman year. Too much happens. Every freshman month equals six regular months – they’re like dog months.”
N: NaNoWriMo. Fangirl was Rainbow Rowell's NaNoWriMo project! How awesome is that?
O: Originality. I've never read another book like Fangirl.
P: Perfect. Okay, so Fangirl not quite perfect. But it comes pretty darn close. It's definitely a favorite.
Q: Quotable. I saved so many quotes from this book. I love Rainbow Rowell's writing style, and she had some amazing, funny, and relatable quotes in here.
R: Roommate. Cath's roommate, Reagan, was a really interesting character! I liked getting to know her. Rainbow Rowell showed the difficulties of having a roommate, but the advantages, too.
S: Simon Snow. I know not everyone was a fan of the snippets Simon Snow books and fanfiction, but that was one of my favorite parts! I looked forward to them. More than anything, I quite honestly want Rainbow Rowell to stop all current writing projects and write the Simon Snow books for real. I would totally read them. Plus, they have the best fandom name ever: Snowflakes. How cute and fun is that?
T: Twins. Cath and Wren (Cath. Wren. Get it??) were twins who had been close for a long time, but Wren was always the outgoing one with the stronger personality. They also used to be Simon Snow fangirls together. But in college, Cath and Wren struggled to find that relationship where they could still be close sisters but also have separate identities.
U: "Underneath this veneer of slightly crazy and mildly socially retarded, I’m a complete disaster."
V: Variety. If you're looking for something a little different, chances are Fangirl fits the bill. It's not typical YA, NA, or adult romance, but it is sure to appeal to lovers of any of the three.
W: Writing. Cath was a writer. She wrote fanfiction, and she was at college to study writing. And her writing was actually good.
X: X-treme Swoons. Yeah, okay, so I cheated a little. But seriously. SO MUCH SWOONING in this book.
Y: Young. Cath actually seemed young in a lot of ways, even though she was mature in others. And I loved that. College is a time for figuring things out. Most people are still quite young and immature as freshemen, and that's okay.
Z: ZZZs. HA. Just kidding. You totally won't be getting those until you finish this book. Who needs sleep, anyway?

“I’m not really a book person.”
“That might be the most idiotic thing you’ve ever said to me.”
There should be a word for a laugh that ends as soon as it starts. A laugh that’s more a syllable of surprise and acknowledgement than it is anything else.
Sometimes writing is like running downhill, your fingers jerking behind you on the keyboard the way your legs do when they can’t quite keep up with gravity.
All quotes have been taken from an advance copy and may differ in the final edition.