Click on the image above to learn more about Fortnight of Festivities and enter in the giveaway! 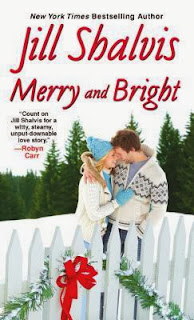 
Summary: Jill Shalvis is back with a collection of three endearing, sexy, and yuletide-filled short stories.

I'm sure it came as a surprise to absolutely no one that I was salivating over this book. Even though I'm not always a fan of short stories - I prefer the more long, drawn out variety - Jill Shalvis can simply do no wrong, and I want to read everything she writes. And what's a Christmas elf to do when one of her favorite authors puts out a Christmas collection?

Read it, of course!

And I did. I sped through this book pretty quickly! The fact that it is broken into three different stories makes it seem to read faster than a normal book of its size. I'm going to go ahead and break it down by story, because the three were completely separate. They had no connection whatsoever, aside from the fact that they all took place around Christmas.

This first story sucked me right in. It was about a chemist named Maggie who always went for guys who were exactly like her: intelligent, motivated by work, and not overly romantic. So due to some encouragement by her sister, Maggie decided to go after something different: a night with Mr. Wrong. And who should be there to be her Mr. Wrong but Jacob, the sexy architect she'd crushed on in high school.

This was a really cute story with a surprising bit of mystery/adventure thrown in. In fact, aside from the fact that Maggie was a very different sort of narrator, the whole thing read very much like a Stephanie Plum novel. Entertaining, sexy, and a very quick read, "Finding Mr. Right" was quite the fun way to spend a morning.

This second story had a rather interesting premise: B&B owner Hope had taken a loan out from her (very pre-epiphany Scroogeish) step-brother, and his (adorably geeky and yummy) solicitor was there to assess whether or not it appeared she would be able to pay it back on time. And then he got snowed in. One of my favorite tropes!

Unfortunately, this one shared quite a few elements with the first story and thus failed to stand on its own feet. With some stronger editing, I think it could have been really good. But it was a little weak, and reading it right after the first story kind of felt like reading the same thing over again with different names. And quite a bit more snow. It was cute, though.

The third story was about Cami, a strictly by-the-rules woman who was annoyed by no one more than Matt: hard-working office playboy - and recently appointed mayor/Cami's boss.

I think this was probably my favorite of the stories. Due to the length of the story, their relationship had to progress rather quickly. But although it did feel a tad rushed, I believed it could happen. Matt and Cami had known and respected each other as fellow hard workers for a while, even if Matt did set Cami's teeth on edge. In a fun trope change-up, though, it wasn't mutual! Matt knew he pressed Cami's buttons, but he had always been intrigued rather than put off by her. They also had some fabulous chemistry, which is hard to create in the space of only 80 or so pages. I could also see how some people might be put off by Cami as a narrator, but I really liked her character and seeing the story from her perspective.

These stories weren't anything ground-breaking, but they were definitely enjoyable! If you're looking for some entertaining holiday reading that doesn't take itself too seriously, this collection is a fabulous choice.

First
For two months, Maggie Bell walked past him every day on her way out of the office, and every day she took in that tall, leanly muscled body, those incredibly well-fitted Levi's hanging low on his hips thanks to his tool belt, and forgot everything else just to take it all in.
Favorite
It was the right thing to do, the polite thing to do. Thank-you-for-the-perfect-sex cookies.
Teaser
He couldn't have been more stunned if he'd just been hit head-on by a moving freight train. He'd just had the best sex of his entire life. On the ground. In the great outdoors. In the wilds of Colorado. In the snow.