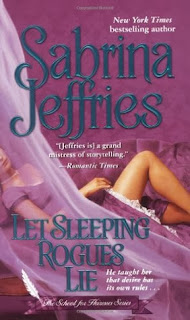 
Summary: When Madeline Prescott took a teaching position at Mrs. Harris's School for Young Ladies, it was to help restore her father's reputation. Instead, she's in danger of ruining her own. The devilishly handsome Anthony Dalton, Viscount Norcourt, has agreed to provide "rake lessons" to Mrs. Harris's pupils so they can learn how to avoid unscrupulous gentlemen, and Madeline is to oversee his classes. She has always believed that attraction is a scientific matter, easily classified and controlled — until she's swept into the passionate desire that fiercely burns between her and Anthony. Nothing could be more illogical than risking everything for a dalliance with a rake — even one who's trying to behave himself. Yet nothing could be more tempting...

It's always so disappointing when a highly anticipated book fails to deliver. I stumbled upon Let Sleeping Rogues Lie in the library months ago but didn't get a chance to read it the first time I checked it out. I got it again recently, super excited that it hadn't fallen through the hazardous cracks of my memory. After reading it, though, I kind of wish that it had.

I went into Let Sleeping Rogues Lie (to which I will henceforth be referring as The Adventures of the Bad Boy and the Honeypot, a title stemming from the hero's oh-so-excellent favorite terms for his and Madeline's respective genitalia) expecting it to be cracktastic. I mean, a rake giving rake lessons to a bunch of schoolgirls. Not a terrible idea, but certainly anything but a conventional one. Add in the pretty schoolteacher who is to supervise his efforts, and it promised to be loads of fun. To be fair, the infinitesimal portion of the book which focused on this was extremely enjoyable. I absolutely loved those scenes! Even though everything which caused the situation to fall into place was rather contrived - a trend which unfortunately lasted the entire book - I had expected that, and the scenes it delivered were just as fabulous as I'd hoped.

Then everyone jumped into a handbasket and did his or her own part to paddle the book toward to its fiery ultimate destination.

I did not particularly like Madeline or Anthony. Their relationship was a hot mess of schemes, half-lies, and manipulation. Done right, this can be a BLAST. I know it's not the healthiest dynamic, but it can be great when the partners are both aware of their one-upping relationship and hold mutual respect (whether the good kind of the you're-my-enemy-but-I-know-we're-equals kind), usually mixed in with some banter and explosive chemistry. But this was so not the case at all here. Everything was life-or-death serious. All their actions were far-fetched and based on wafer-thin logic, and both were plagued by constant paranoia about the motives behind EVERY SINGLE MOVE of the other party. It got old very quickly.

And the best part? OH THE BEST PART.

Anthony was forcing Madeline into letting him give her ~Lessons in Seduction~ by blackmailing her. He held not only the favor he promised her (throwing the party) over her head, but implicitly the fact that he could have her fired from her position and take away her livelihood.

Now, to be ~fair~ he was never going to force her to have sex with him. Just do everything except that, then let her decide whether or not she wanted to go all the way after the party later that week. And he was pretty darn sure she would say yes.


At last she would be his. She’d as much as said so at Godwin’s. And even if she came to the party determined to resist him, that would last only until he got her alone in a corner and kissed her. Her natural sensuality would lead her right to his bed.

And if that doesn't endear you to our gag-worthy "swoon-worthy" hero, let me show you a lovely excerpt from their first lesson, right after Madeline put a stop to things.


"It's time for you to leave, Lord Norcourt. I suggest you return to the stables until I make my appearance outside."

"I'm not leaving until we've finished the lesson," he said, half growl, half threat.

She darted for the entrance. Swift as a hawk, he lunged, catching her at the door, pinning her against it. With fear gripping her, she drove her elbow into his ribs hard enough to make him grunt and fall back.

In that instant, she had the door open. She was halfway out when he cried, "Wait!"

She turned to glare at him, fully prepared to fight.

"We're not done, sweetheart," he vowed. "Run, if you like, but I will catch up to you eventually, and we will finish our lesson."

To prove he did possess SOME morals, though, Anthony did have a huge hang-up about virginity. At first, he was determined not to mess with her beyond their first kiss because he never dallied with innocents. However, based on the fact that she asked for a favor in exchange for the favor she had done him (plus the fact that she blushed once, though how that is relevant is beyond me), Anthony decided she couldn't possibly be a virgin and was therefore a totally acceptable target for his machinations. Yeah.

Apparently it was also a-okay to continue in this vein, going by the fact that he later PLANNED TO DRUG HER (or pressure/convince her to try it, rather, since we're not supposed to think he's the villain) so she would reveal her secrets. He had second thoughts and decided not to go through with this (supposedly, since we only have his word on this, as circumstances prevented him from doing it even if he'd wanted to).

And I haven't even mentioned the childhood abuse, drug usage, murder, and scandal which loomed over everything like a wet blanket of crap. Nor the fact that Madeline herself wasn't innocent in all this, lying with every other breath, but at least her schemes stemmed from desperation and attempts to do the right thing for her father. And in their original bargain, Anthony was trying to do the right thing for his niece. So, you know, there were some good motives at play here even if you have to squint and tilt your head to the side to see them.

And somehow, in the midst of all this flapdoodle (noun: ridiculous situation or behavior. A word I just learned when using a thesaurus to try to find the perfect word to put here. Mission accomplished.), they fell in love. Or seemed to think they did. At the very least, they discovered they could have some pretty wild Bad Boy/Honeypot adventures, since Anthony was able to orgasm no fewer than three times in a row with no pauses in between. Due to his Incredibly Lustful and Beastly Nature, of course, amplified by the fact that she loved him. No, really, don't just take my word for it.


“Because it’s already hard enough for me to control myself around you. If I thought you really loved me–”

You would respect her enough to be able to stop if she wants you to?

Please tell me that's what you were going to say.

Although later in the scene, Madeline did finally lay waste to his nonsensical idea that a woman couldn't possibly want sex as much as he did.


You and your half-baked notions about what a woman can bear – you’re the one who has ‘no idea’ about me. I can be just as ungoverned as you.

The one character I actually liked in this book was Mrs. Harris, the headmistress. She was an interesting character from what we saw, a strong but fair woman who took no nonsense. I really would have liked to know more about her!

In the end, The Adventures of the Bad Boy and the Honeypot - er, Let Sleeping Rogues Lie had some positive qualities, but it was not enough to make up for the nonsense that pervaded the story. Even though I held on, hoping for the best, I was ultimately disappointed.

First:
“Your father is ready to see you, Master Dalton.”

Teaser:
A reputation isn’t always the measure of a man.


Unfortunately, Let Sleeping Rogues Lie was not a hit for me. But I have a bad habit of choosing terrible introductory books. For instance, I wasn't impressed by the first Julia Quinn book I read, but now she's one of my favorite authors! So I think Ms. Jeffries will definitely be a pick for an upcoming Second Chance Saturday. Does anyone have suggestions as to which of her books I should choose?