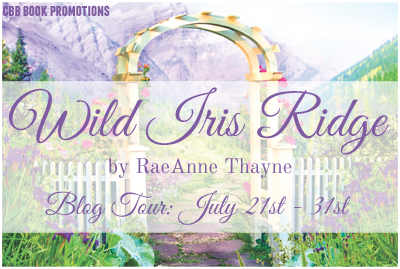 Welcome to my stop on the Wild Iris Ridge blog tour! Be sure to check out the Tour Page at CBB Book Promotions for all the other stops. 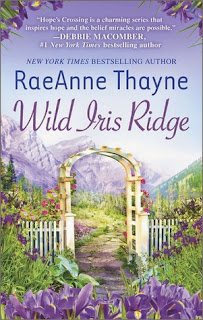 
Summary: Lucy Drake and Brendan Caine have only one thing in common, and it's likely to tear them apart. Because it was Brendan's late wife, Jessie—and Lucy's best friend—who'd brought them together in the first place. And since Jesse's passing, Brendan's been distracted by his two little ones…and the memory of an explosive kiss with Lucy years before his marriage. Still, he'll steer clear of her. She's always been trouble with a capital T.

Lucy couldn't wait to shed her small-town roots for the big city. But now that she's back in Hope's Crossing to take care of the Queen Anne home her late aunt has left her, she figures seeing Brendan Caine again is no big deal. After all, she'd managed to resist the handsome fire chief once before, but clearly the embers of their attraction are still smoldering…

Even though I'd never read any of the Hope's Crossing books, I jumped at the chance to read this one. Why, you ask? Because of the story. I mentioned in a recent Lit Ladies video just how much I adore the storyline where a widower and his love interest are only connected by his late wife. It all started years ago with Sarah's Child, so I guess I'll blame Linda Howard. But I love stories that rip my heart out of my chest before providing the HEA, and this is obviously a storyline that can do that. However, interestingly enough, Wild Iris Ridge didn't capitalize on that too much. It had been two years since Jessie, Brendan's late wife, had passed, and though grief was obviously a factor, it was handled tastefully, and the book wasn't an angst-fest (like, say, Within Reach *clutches heart*), which I know a lot of readers will appreciate.

Having never read anything by RaeAnne Thayne before, I was definitely pleasantly surprised by how much I enjoyed Wild Iris Ridge. I finished it in less than 24 hours. I would have finished it in one sitting, but I had to do the whole sleeping thing in order to do the whole work thing the next day. But I finished it at the next possible opportunity. The story unfolded at a leisurely pace, - though the I-love-you-HEA was a little rushed - but I couldn't put it down!

The hero, Brendan, was a fire chief with two small children, and the heroine, Lucy, was a marketing director who had just been fired from her job (basically as a scapegoat, since the fiasco wasn't her fault). She had temporarily returned to the mansion in Hope's Crossing she had inherited from her great aunt to turn it into a B&B, which had been a dream of her great aunt as well as Jessie, who had been her cousin and best friend. As she lived less than a block away from Brendan, they interacted frequently for a variety of reasons, and there was obvious chemistry between them from the start.

I liked both Brendan and Lucy! They were very different but compatible, once they got past their original dynamic where each thought the other didn't like them, leaving them in a perpetually awkward state. Also, Brendan's kids were absolutely adorable, and he had a large, messy, wonderful family as well. Clearly, you could open up a copy of Wild Iris Ridge alongside a list of my weaknesses and check them off one after the other.

My one real issue with this book stemmed from a tiny source, but it's a huge pet peeve of mine: a puppy. I'm not a dog person by any stretch of the imagination, but I've been around them enough to know that puppies are not magical, sparkling little balls of sunshine that miraculously cure all evils with which they come into contact. But that's what happened in this book. The energetic boy with no attention span settled down, the introverted bookworm became more outgoing, and the rebellious teenager suddenly became totally friendly and helpful with only a mild dose of sarcasm. I mean, seriously? No. Just no.

Beyond this, though, I didn't have any serious issues. I liked how the Career vs. Small Town dilemma was handled. I loved the family atmosphere and the characters. Plus, the hero had a brother who was totally geeky cute and pushed all my nerd girl buttons. I will definitely be on the lookout for his book! And in the meantime, I will probably investigate some of the earlier books in the series. If my feelings for this book are any indication, they will probably be a hit!

First:
This was, without question, the craziest thing she had ever done.

Favorite:
An object in constant motion eventually had to run out of steam. She didn’t know if that was an actual physics principle, but it definitely applied to five-year-old boys.

Teaser:
Don’t make the mistake of thinking because a place is small, nothing of significance happens there. The smallest moments in a person’s life can be life-changing.

*All quotes from a review copy and may differ from the published version. 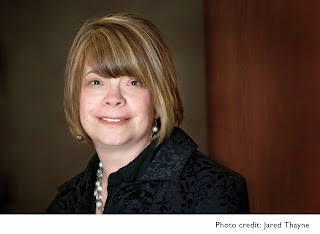 USA TODAY bestselling author RaeAnne Thayne loves words. This led her to a fifteen-year career in journalism as a newspaper reporter and editor. But through it all, she dreamed of writing the kind of stories she loved best, romance, and has since published more than 40 titles. RaeAnne finds inspiration in the rugged northern Utah mountains, where she lives with her hero of a husband and their children. She loves to hear from readers and can be reached through her website, RaeAnneThayne.com.

Don't run away just yet, because now it's time for the giveaway! TWO WINNERS GET: 1 book from the Hope's Crossing series, 1 beaded HOPE bracelet, 1 Iris necklace (US/CA)