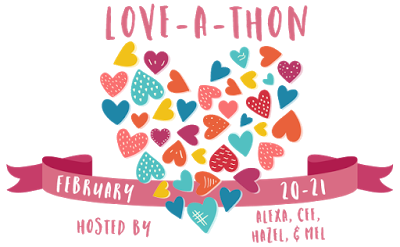 Welcome! I always manage to just miss the Love-a-Thon somehow, so I'm glad to finally be participating! Here's an introduction, which will be handy for...well, probably, most of you. If you're new to the blog, hello there! Nice to meet you! If you're an old follower, hello to you, too! It'll be nice to get reacquainted. But anyway, here we go!

Where in the world are you blogging from?

How did you get into blogging in the first place?

I had a LiveJournal back in the day. I started reviewing books more and more often, and around the end of 2010, realized I wanted to start blogging about them, even though the only blog I followed at the time was Smart Bitches, Trashy Books (which remains awesome to this day). So I did some research, made a blog, and the rest is history! I made my own blog, then joined The Book Barbies with Racquel in 2012.

I accidentally took a very long hiatus due to fandom this past year, but I'm getting back into book blogging now, and I'm pretty excited about it.

What genre do you read and review the most on your blog?

Romance, probably. There's also quite a bit of YA. But my reading tastes have broadened recently, including more literary fiction, nonfiction, etc. so my reviews will reflect that. I even have posts on fanfiction and graphic novels in the works right now. You never know what might pop up!

• #1 is Furthermore by Tahereh Mafi, hands down! I am so in love with Mafi's writing, it isn't even funny. As an aside, I love how colorful the cover is!
• Kindred Spirits by Rainbow Rowell. Rainbow + Star Wars? Count me IN.
• A Court of Mist and Fury by Sarah J. Maas. Even though it was for none of the reasons I expected, I loved the first book and can't wait for the next one! I NEED MORE.
• Marrying Winterborne by Lisa Kleypas. I was intrigued by this couple in the first book and am quite desperate for their story!
• I am going to be a blind optimist and say Book #5 in the Queen's Thief series by Megan Whalen Turner. Because going by previous release dates, one should be due out this year. And I will cross every possible appendage for this to happen.

What’s an underrated book or series that you think everyone should read?

My official answer is Meant to Be by Lauren Morrill. Seriously one of my favorite YA books that doesn't get nearly enough love.

Which book boy or girl would be your book boyfriend/girlfriend?

Oh, trust me, you don't want to get me started! LOL. We'll just go with the standard answer of Hardy Cates. Boom. You can't go wrong with Hardy Cates.

Apart from reading, what are your other hobbies or interests?

I love cooking and watching way too much television (currently making my way through Farscape and Frasier). I am also pursuing my dream of being able to flawlessly sing my way through the entire Hamilton soundtrack. I've had over three months to practice at this point, so I'm probably as skilled at it as I'm going to get.

At a party, the DJ suddenly changes the song – and it’s your song. What song would be playing?

Literally any song from Hamilton. Preferably "Satisfied" or "Non-Stop," though, if I had to choose.

Author you want to meet and sit down to tea with?

SO MANY. Tahereh Mafi. Lisa Kleypas. Jill Shalvis. Jen Hatmaker. Sarah J. Maas. Margaret Atwood. Megan Whalen Turner. Megan Mayhew Bergman. Eloisa James. Can I just have a giant author speed dating session? Except instead of five minutes I get like an hour with each one. Someone make this happen.

There's a bit about me. I can't wait to read all of your answers, as well!