(Review) Sleigh Bells in the Snow by Sarah Morgan

Click on the image above to learn more about Fortnight of Festivities and enter in the giveaway! 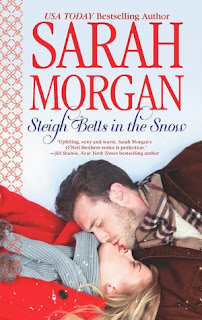 
Summary: Once upon a time, Christmas was Kayla Green's favorite time of year. Now all the workaholic wants for Christmas is for it to be over—as fast as possible! So when duty calls her to snowy Vermont to close a deal with a new client, Kayla is grateful for an excuse to avoid the holidays for another year.

Jackson O'Neil left a thriving business behind to return home and salvage his family's resort—it's in his blood, and he can't let it fail. Now that he's got marketing whiz Kayla Green working with him to put Snow Crystal on the map, success is on the horizon. The fact they strike enough sparks off each other to power all the Christmas lights in Vermont is just an added bonus.

Kayla might be an expert at her job, but she's out of her depth with Jackson—he makes her crave the happy-ever-after she once dreamed of, and it's terrifying. As the snowflakes continue to swirl, will the woman who doesn't believe in the magic of Christmas finally fall under its spell?

For some reason, when I picked this book up weeks after I looked at the summary for it, I was thinking it was going to be a snowbound together story. Not quite sure why I thought that, but there it is. I was prepared for something cute, fun, and sexy. And that's what I got. But you guys, I also got so much more.

Sleigh Bells in the Snow was not a story about two people being snowbound together, but a family business on the brink of going under. Jackson had come home to do his best to keep Snow Crystal Resort & Spa afloat, but they were lacking publicity. That's where Kayla, workaholic and super marketing genius, came in. Jackson's grandfather was sure Kayla could not come up with a decent campaign for Snow Crystal without truly experiencing it, so Kayla was to stay on the property for a week first. Thus, Kayla decided to come immediately. After all, Kayla wanted to escape Christmas, and a secluded cabin in Vermont is the best possible way to barricade yourself away, right?

Wrong. At Snow Crystal, Kayla found Jackson's family, and they were all about Christmas. There are few fictional families I've ever loved as much as I do this one. Shannon Stacey's Kowalski family. Julia Quinn's Bridgerton family. But the O'Neils are a class all of their own. And my favorite thing about them was that it wasn't just the official O'Neils. There were a couple family friends in the mix who were clearly just as much family as the ones related by blood. As that is very much how my own family operates, I absolutely love seeing it in books. The O'Neils were close-knit and clearly loved each other, but they still gave each other a hard time and even fought sometimes. The interactions between the three brothers in particular were simply fantastic. Each character was clearly presented and unique, and while each stood out individually, they were very much a collective unit. Jackson's grandfather loved Snow Crystal and was resentful of Jackson for changing so many things. Jackson's brother Tyler was doing his best to raise his teenage daughter who had just come to live with him. We even got some sneak insight into that relationship with a little bit of their perspective, and it makes me so excited for Tyler's book. Not to mention the fact that I'm already falling all over myself with how much I want his love story with Brenna. But I digress.

Due to issues from her past, Kayla was extremely uncomfortable with both Christmas and the open affection of the O'Neil family. It broke my heart to watch her go through this. I've read a lot of books where the hero or heroine hates Christmas due to something tragic in their past, but I think this was the best handling and explanation of it that I've ever seen. Though a little dramatic, it felt authentic, and I loved seeing Kayla slowly open up and conquer her fear caused by the past.

Kayla and Jackson had some great interactions. It kind of reminded me of "The Proposal," actually, with the closed-off, workaholic city girl out in the middle of nowhere and learning to adapt and open up with the help of a very hunky guy. Even though their story basically took place over a week and thus they had pretty quick relationship development, it never felt rushed. They had great chemistry and had some butterfly-inducing almost moments, which ultimately led to things getting pretty steamy but never gratuitously so, which I appreciated. There were so many more important things to focus on! Like Jackson teaching Kayla to ski, which made me giggle:

Or even Kayla bonding with Jackson's mother, which nearly made me cry.

Speaking of crying, I want to bawl over the fact that the next O'Neil book doesn't come out for another six months. And Tyler's book, which I'm most eager to read, doesn't even have a release date yet. But I will wait for it. Oh yes, I will.

Also, just a moment to look at how freaking cute the cover is, because it needs to be admired. Now, moving on.

You guys, I don't even quite comprehend why I loved this book so much. It was one of those times when everything just clicked. The amount of Christmas in the book was just right, not just a bit just shoved in there as a marketing technique. I loved the family. I loved the characters. The setting was positively magical. The writing was fantastic. I may not be able to fully explain it, but I can tell you one thing: This was my first Sarah Morgan book, but I can guarantee you it most definitely will not be my last.

First:
Kayla Green cranked up the volume on her favorite playlist and blocked out the sound of festive music and laughter wafting under her closed office door.
Favorite:
I preferred snow when it was my desktop image.
Teaser:
To hell with professional, it’s Christmas. People do crazy things at Christmas.

All quotes taken from an advanced copy and may appear different in the final version.