(Review) Between You & Me by Marissa Calin 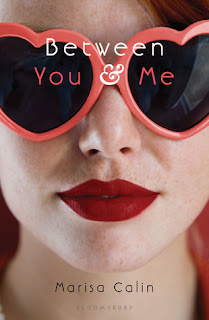 
Summary: Mia appears on the first day of drama class, and she is fascinating. You can't cast someone to be fascinating, they just are. And Phyre can't help but want to impress her - especially since Mia is her teacher. But as she rehearses for the school production, Phyre realizes that her feelings for mia go deeper than she's ever experienced.

Phyre's best friend is a constant, ready to help Phyre make sense of her emotions. But just as Mia doesn't realize what Phyre feels, Phyre can't fathom the depth of her best friend's devotion...until it's almost too late.

Written as a screenplay, Between You & Me offers a breath-by-breath, moment-by-moment story of first love.

I've had Between You & Me on my TBR list for a couple years now, and I finally got around to picking it up for this round of Bout of Books! I didn't quite have time to sneak it in under the wire for BOB, but I kept it around and picked it up a few days later.

This is a somewhat difficult book to review, because there were a lot of things about it that worked for me but some things that didn't.

Between You & Me is the story of Phyre (pronounced like “fire” according to the baby name websites I checked), a sixteen-year-old girl who develops a crush on her teacher. It happens to the best of us. (I mean, I was homeschooled, so I didn't get the Hot Teacher experience until college. But hey, better late than never, right?)

The biggest thing I liked about this book is that Calin was not afraid to take risks when writing it. The whole thing is told in a screenplay format, but it's more than just reading a play. There's plenty of internal dialogue and description. It is difficult to describe, but trust me when I say it works! But perhaps the most interesting aspect is that the book is written from the perspective of Phyre (“me”) but addressed to her long-time best friend, known only as “you.” That's it. We don't get a name or a gender or a physical description other than tanned skin and blonde hair. It is entirely up to the reader's interpretation.

I am always up for something new and interesting in books, and this is no exception. It works very well with this story and these characters. To me, it felt new and refreshing and fun without being gimmicky. The script format in particular serves to enhance the story rather than take away from it, as the vast majority of the book focuses on theatre classes and rehearsals and performances. It all fits together in one easy-reading package.

But back to the story. Phyre develops an instantaneous crush on her new drama teacher, Mia. Ahh, crushes. Probably both the best and worst thing about being a teenager. I have to say that Calin does an exceptional job capturing what it is like. The way they overtake your every thought, the hyper-awareness of every single movement you make around them, the way you blow little moments entirely out of proportion. Reading this was like stepping into a time machine and jumping back the better part of a decade, and though the experience was not entirely pleasant, it was certainly familiar.

Yet for all the things I liked about Between You & Me, it took me a long time to really care about what was happening. I think it probably stemmed from the fact that I was obviously not rooting for the teacher/student romance, nor did I think it was going to happen. Because as long as you've read the cover summary (and probably even without it), you know the love story is clearly between Phyre and her best friend. You (the reader) just have to wait until she realizes that “you” (the best friend) has been there all along and that she belongs with them.

Go ahead and burst into Taylor Swift now. I'll wait.

However, most of the book consists of Phyre obsessing over Mia (though there's barely more than like two lines about sexuality, which I found odd) and not much else. I wanted a little more substance, a little more of her relationship with her best friend. I also found myself growing annoyed at Phyre at times, because her actions were often flighty and incredibly self-involved, even for a sixteen-year-old girl with an all-consuming crush. So that took away a bit of my enjoyment as well.

Overall, though, I did like the book, and I appreciate the risks that Calin took when writing it. It was courageous and definitely made an interesting change of pace. I would recommend Between You & Me to anyone looking for something a little different but not too deep or difficult of a read.

First:
Phyre, sixteen, that's me! And this is my life. Or how I picture it. The door swings open and I smile up at you.

Teaser:
I wonder how different I would be in a world with no consequences. Will the voice telling me what's right always be so loud?