(Review) The Word for Yes by Claire Needell 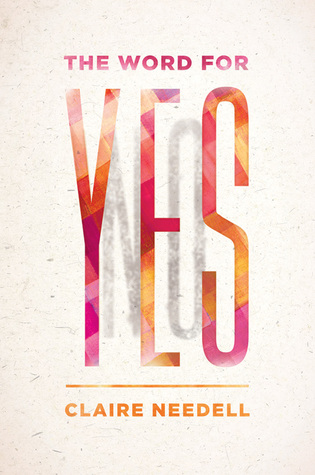 
Summary: After their parents’ divorce, Jan, Erika, and Melanie have to get used to the new world order: a father who’s moved to another continent and a mother who throws herself into moving on. Jan, off at her first semester of college, has plenty to worry about, including an outspoken roommate who’s kind of “out there” and an increasingly depressed and troubled long-distance boyfriend. Her younger sisters, left at home in New York City, and dealing with all the pressures of life in high school, aren’t exactly close. Erika is serious and feels awkward and uncomfortable in crowds, though her beauty tends to attract attention. Melanie is socially savvy and just wants to go out—to concerts, to parties, wherever—with her friends. The gap between all three girls widens as each day passes.

Then, at a party full of blurred lines and blurred memories, everything changes. Starting that night, where there should be words, there is only angry, scared silence.

And in the aftermath, Jan, Erika, and Melanie will have to work hard to reconnect and help one another heal.

{ Trigger warning for mentions of rape. }

The Word for Yes is the story of three sisters: Jan (The Oldest), Erika (The Brain), and Melanie (The Pretty One). It is also the story of some of their friends and acquaintances, because there are a few portions narrated by characters other than the sisters. But by and large, it is about these three girls going through the various stages of their lives along the course of several months, about the circumstances that draw them together and push them farther apart.

The main thing you need to know about this book is that it does tackle very heavy issues, the main one being rape. Needell did not shy away from the confusing, blurry circumstances that can surround it, and that is important. Rape isn't always about the random predator that leaps on unsuspecting girls from the bushes - in fact, scenarios along that line make up a scarily low percentage of sexual assaults. But I digress. Rape is an important topic, and I appreciate that Needell took on the challenge of writing a story about it.

One positive I can say about the book is that sometimes Needell captured very human aspects to some of her characters. There were moments where I felt like I was observing actual people, with their little details and idiosyncrasies that make them unique.

Unfortunately, however, the book overall was not a success for me.

My main complaint is, without a doubt, the writing. It was incredibly stilted and off-putting, especially in the first few chapters. The author relied very much on telling rather than showing, both in the narration and in the actual dialogue. The dialogue itself was often unrealistic, sometimes rambly to the point of being incoherent, in the case of Jan's roommate Eliza. The entire book was bogged down a slew of unnecessary details. The random backstories and side characters that were thrown around were distracting and did nothing to enhance the story. The author attempted to tackle too much in the limited number of pages and as a result, it just didn't all come together like it should have. I also wasn't a fan of the ending, which was very abrupt. I think a more thorough editing job would have helped this book immensely.

The other problem was the characters. I had trouble connecting with them. But I couldn't quite tell if it was because the characters themselves or because I couldn't connect to the book overall, due to the writing. They seemed to me to be at turns flat then larger-than-life, relatable then repulsive. There were moments when I would empathize with one sister or another, but then she would totally lose me. It was an odd experience that I can't quite describe, but it might have been a problem with me rather than with the book.

The Word for Yes had potential, and I appreciate the courageous effort by the author to tackle such an important subject. There was a great book here struggling to get out, but in my opinion, it ultimately failed.