Happy father's day! As we love when family is present in books, we thought this would be the perfect opportunity to share some books with y'all that we've enjoyed that had a complex, developed dad. Even if the relationship is negative! We know not all dads are the best of the best like ours are so these are just some books I've enjoyed with a developed dad, whether he's a good OR bad dad.

(We would have totally done this for mother's day except Racquel usually always dislikes mothers in YA, but that's a post for another day.)

Mclean's parents just divorced and she chose to go live with her dad. The divorce situation hasn't been easy on Mclean and she feels like she should side with her dad. The book explores forgiving a parent, in this a case the mom, and accepting a divorce. Sarah Dessen handles it really well (unsurprisingly!).

A direct quote from the book will sum everything up:


"There's a difference between the words father and dad. And it's more than three letters."

Jude is spending the summer with her dad fixing an old motorcycle of his (let's not forget the hot boy helping them *wink*), her dad who has been diagnosed with Alzheimers which is really hard on Jude and her family. Warning! emotional read!

Piper relationship with her dad is not the best because of her deafness and his non acceptance of it. Their relationship progression is so great and I cried twice.

Two different books and heroines but the same man, Churchill Travis. In Sugar Daddy, Churchill becomes a father figure to Liberty (and the father of the man she's falling for) while in Blue-Eyed Devil, Churchill is Haven's father. We see Churchill in different lights because while Liberty couldn't have found a better father figure, Haven feels like her father doesn't respect her boundaries. There is a great contrast in the books and I'm so impressed but the complexity. Recurring characters are always loved or hated, we only see one side of them. Different people feel different about others so it's only realistic that we get different feelings on Churchill from Liberty and Haven.

Deanna and her father's relationship went downhill ever since he caught her in a backseat of a car with a boy.  I read it a long time ago so I don't want to say anything because it could be inaccurate but I loved this book and the father-daughter relationship is worth mentioning in this list, yes!

Another one I read a long time ago but let's just say this, the secret life of prince charming (who's the dad) is not so charming. 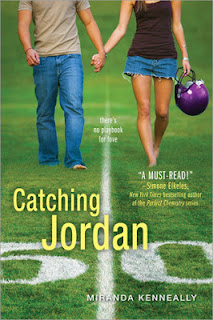 Jordan's father is a realistic and well-developed character, and I really love the relationship between them. Though it is pretty rocky in the beginning, as Jordan matures and grows over the course of the book, she realizes that she has misinterpreted a lot of her father's behavior.

This is a bonus one! The YA guy in this one *IS* the dad! I loved Sebastian and his red jacket and Bo.


I didn't go through the books I've read; these picks were just at the top of my head. I know I missed some, but do you any recommendations for me for books with developed dads? I would love you for forever and a day. No! For forever and two days.