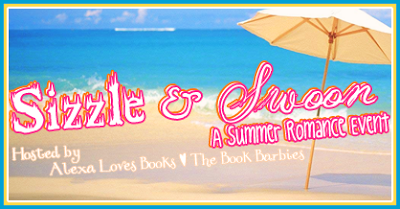 It's no secret that here at The Book Barbies, we're fans of romance all its forms -- mainly YA, contemporary, and historical. This is a love we share with Alexa @ Alexa Loves Books, a fabulous lady who approached us a while back with the idea of doing a fun summer romance event. Because who doesn't want to read something hot in the heat? So for two weeks, we'll have discussions, lists, reviews, and simply general merriment whilst celebrating the awesomeness of romance! Please feel free to join in! We're always up for talking about anything related to romance.

We'll kick off today with:

Why We Read Romance!

Racquel: I've always enjoyed romance in books ever since I got my first taste of it in a YA book-- before I know what YA was! Then came a period of time when I couldn't find the books with the right age group so I settled for reading online. Stories written by other teens and some were bad, some were good, and some are better than the published books I've read. I've met a lot of teens during that time but I made a friend who I now call a bestfriend 3 years later (who says you can have online friends?!) She recommend Sugar Daddy by Lisa Kleypas and the rest was history. I did read a few (stolen from my mom haha) Harlequin Blazes books and free romance books online but Lisa Kleypas hooked me. After that, I became a serious reader but I only read contemporary YA and romance. Though (shocking, I know!) I only discovered historical romance last summer!

I think the reason I read romance is because it's in real life, I'm not a romantic at all. I don't like anything cheesy or sweet or cute and my idea of romantic involves burger king and nutella. But in books, I get to know the characters personally and I can believe their story *is* romantic, not just something a hallmark commercial is trying to sell or a mainstream idea of what is romantic. Movies/TV shows and life are filled with romantic gestures but I don't care for it because it's just not personal. Any girl can get flowers from her boyfriend and the girls in school will "ahhh" while I roll my eyes. What if she hates flowers? What if she's allergic? But on the other hand, she could love flowers and he could be the love of her but I don't know so I don't care. But no doubt I have a romantic bone or two in body because I enjoy the hell out of a well written romance! I just like my romance personal and subtle, no need to shout from the rooftops to make me swoon.

Sharon: My love affair with romance officially began when I was about 12 years old.* One day, I discovered a small stack of romance novels in the guest room of my grandparents' house. Naturally, I picked up the one that looked like Christmas (the title of which I still don't know, despite frantic Googling). Thus began the time of my life I've dubbed The Super Secret Romance Ninja Years, during which I (secretly, due to not exactly being allowed to read them yet) devoured dozens upon dozens of romances borrowed from my aunt's basement. They were mostly Harlequin Presents romances from the 1980s wherein the heroines were "mousy," the heroes were habitually 10-16 years older, and love conquered all in the end. Penny Jordan was my favorite by far, with my other favorites being Janet Dailey, Violet Winspear, and Anne Mather.

Though I will occasionally pick one up for sentimental reasons, I rarely read 80s Harlequins anymore. I read historical romance, contemporary romance, and YA (which are obviously not "romance novels" technically, but they are often pretty darn romantic. And anything with a good love story is fair game during this feature.), with occasional appearances by the Christian, western, and paranormal subgenres thrown in to mix things up. Whatever the genre, I love a good romance. I'm not satisfied by some cheese and purple prose thrown together with a couple of cardboard cutouts (which, despite the stereotype, is not what the romance genre is). I want well-developed characters and relationships. Thankfully, the romance world is full of them.

For the introduction, we're supposed to talk about why we love romance. To be honest, I'm not entirely sure I can pinpoint one specific reason. I sometimes say I'm "incomprehensibly romantic." I'm a pretty practical person in real life, and I like logic and organization. I've gotten a lot of surprised looks when people learn that I love romance novels. I guess I don't seem to be the type of person who would like romance. But if there's anything I've learned from being involved in the book blogging community (and stalking Smart Bitches, Trashy Books for a couple years before that), it's that romance readers come in all shapes, sizes, ages, lifestyles, and backgrounds.

In conclusion, why do I love romance? I love getting to know characters. I love seeing them interact with each other. I love the humor or the angst that can accompany a good love story. I love swooning over dashing heroes or perfect kisses. I love seeing examples of healthy relationships. I love the hope that springs from seeing an unlikely couple find love. I love how there can be 30 completely unique love stories that share the same basic plot. I could go on, but I'll leave it there for now.

*I say "officially" because I already loved romance; I just didn't know it yet. I loved the love stories in The Sound of Music, Tarzan, The Lion King, and others. My little heart went pitter-patter over Laura & Almanzo, Clark & Marty, Nancy Drew & Ned, and Jo & Laurie (I'll never get over them!). It was really only a matter of time before I discovered that there were books entirely dedicated to love.


Now we're turning it over to you! We don't want to just throw these posts out there. Talk back to us! Talk to each other if you're so inclined! There's nothing like a love of romance to bring people together. Do you read romance? If so, why? What was your first romance (that you remember)? If you're not a fan, why not?